“One idea lights a thousand candles.”

“The force of a good idea is unstoppable.”

— Victor Hugo
The Buy Forward movement essentially began in 1946 when the Dayton Company, now Target, made a permanent commitment to giving 5% of its net profits to community causes. This was a noteworthy event that deserves to be honored.
Now, as you finished reading that sentence, you probably thought that the writer is somehow connected with Target and is working on their behalf, right? Actually, aside from cashiers, I’ve never spoken with anyone at Target. But therein lies the challenge and the opportunity embodied in Buy Forward.
Very few people are aware of Target’s commitment to charities.* This isn’t right. Target’s commitment has been significant in both relative and absolute measures and people should know about it and should honor it, for reasons I will explain below. *based on informal surveys over the years.
There are two good reasons why the awareness of Target’s commitment is low: 1. Target must communicate its marketing message in a competitive environment. The first rule in marketing dictates being single-minded. Communicating its 5% donations would break this rule. It would dilute its primary message—and the budget too—and its charitable giving must, therefore, take a very distant back seat in communications. 2. When someone toots their own horn people are often skeptical. And it may seem even more self-serving for a corporation to do it. This is the reason you might have initially thought I wrote this to support Target. I did not. I am writing this to support a concept that was adopted by Target. I don’t particularly care about Target, but it is a worthy concept and if we support a movement that Target began, Target will rightfully benefit.
So, for the Buy Forward concept to reach its potential, support must come from outside the participating companies. It will thus be more credible, and will allow those companies to focus on their primary message – creating more value, succeeding, contributing more money to their causes, and encouraging other companies to follow their lead. The Buy Forward list was created to start this process and I hope it is just the beginning. If people are convinced that it is a good idea and talk about it—especially those in the press who understand their power to bring life to a good idea—it will grow. To see the vision, imagine there is a town—call it Goodville—where half of the retailers and service providers have a small logo on the front door that looks like the one shown here. 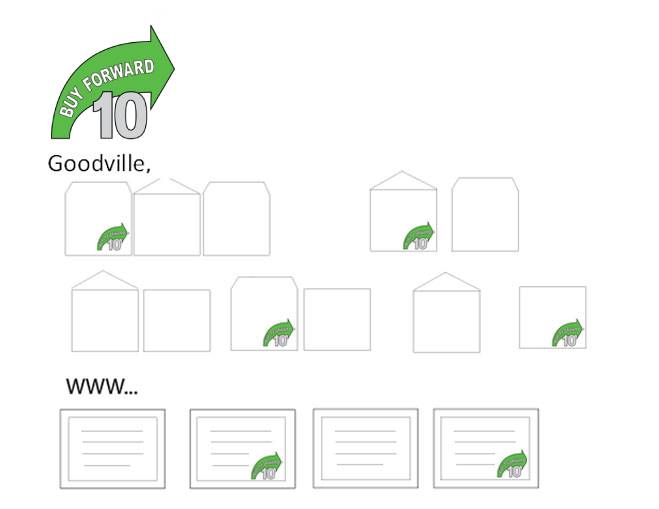 This logo means the owners of that company have permanently pledged a significant portion of their profits — five percent or more — to causes that serve those who are unable to help themselves. And this logo can be found on websites, annual reports and marketing materials of big companies too. People in Goodville seek out the companies with this logo and shun those without them. They do this because good journalists have picked up the cause and taught people to watch for the logos and respond. The people working in these “Buy Forward” companies have an elevated sense of purpose. With more meaning in their jobs, they enjoy what they do more and are more productive.

Which companies do you think will win and which will lose? This is a vision of a better world than the one in which we live. The needy would be helped through free-market mechanisms that harness natural laws to supply large sums to where it is needed. If the chosen non-profit organization becomes wasteful or ineffective, the money can be diverted to a different group. You might say, “It’s a nice idealistic dream, but it seems unlikely that enough entrepreneurs would do this to make a difference. Why would entrepreneurs voluntarily give up ten percent of their companies?” If entrepreneurs fully understood the case (read it here), they would all do it. And if the case were strengthened, by a mobilized press and populace, they would have virtually no choice but to embrace this virtuous cycle. The result would be significantly greater corporate engagement in charitable giving.
Interestingly, this is a modern-day translation of an idea that was written 3000 years ago. Farmers — who were the businessmen of the time — were encouraged to give a tenth  or “tithe,” or what their fields produced. It was originally a religious principle based on the idea that when you give, it comes back, but this notion is also now almost universally accepted among thoughtful people. Many people have embraced the idea of tithing over the years. But it actually makes more sense for a business than for individuals. This is because people can buy the things offered by a business, making it easier for the act of giving to actually “come back,” financially. What’s more, individuals often feel that when they give, it should be in private — whereas a business can and should be part of the process of spreading the word about its giving, with, for example, little logos on their doors, brochures, and ads.
The term Buy Forward starts with “Buy,” because that is, after all, what makes businesses go. People must buy things. It is a call to action.

Join the cause. Talk about it. Buy Forward!